Become a Jazzedge member today and get immediate access to over 800 hours of lessons,
plus detailed sheet music and backing tracks.
Learn MoreSignup Today

Learning all of your key signatures is important if you want to master all of your major and minor scales, or if you're someone who enjoys improvising and wants to know about chord scales. Understanding which key you are in is a crucial first-step when learning to play any new piece of music, largely because you want to know in advance which notes will be sharps or flats, as opposed to having to constantly refer back to the key signature for reminders.

Many music students learn this fairly early on in their musical studies, but just in case any of you missed this nugget, I'm going to show you a little trick for reading key signatures.

When you look at a key signature, understand that the sharps or flats read in order from left to right, even though it looks like they are being written in an up-and-down pattern. Take this key signature, for example:

Here is the trick for finding out which major key you are in when reading a sharp key signature: Find the last sharp. Go up one half-step. This is your major key.

On the example above, the last sharp is A#. Going up one half-step from A# brings us to B. Therefore the key signature written is for the key of B major.

Let's try another one. What is the major key signature written below?

There are three sharps - F#, C#, and G#. The last sharp is G#. Going up one half-step from G# brings us to A. Therefore, this key signature is the key of A major.

The trick for flats is a bit different. For flat keys: Find the second-to-last flat. This is your major key.

Try the flat-key example below.

Reading from left to right, the flats are Bb, Eb, Ab, Db, and Gb. The second-to-last flat is Db. Therefore, this is the key signature for Db major.

This trick will work for all but two of the twelve major key signatures. The exceptions are the key of C major (which has no sharps or flats), and the key of F major. F major has only one flat in its key signature - Bb. And since having one flat means there is no second-to-last flat, this key must simply be memorized. 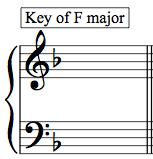 So get started learning all 12 of your major-key key signatures, and try using this trick as often as possible!

®
With the largest selection of highest-quality piano lessons online, Jazzedge has become the place where serious students take their piano playing to their next level.